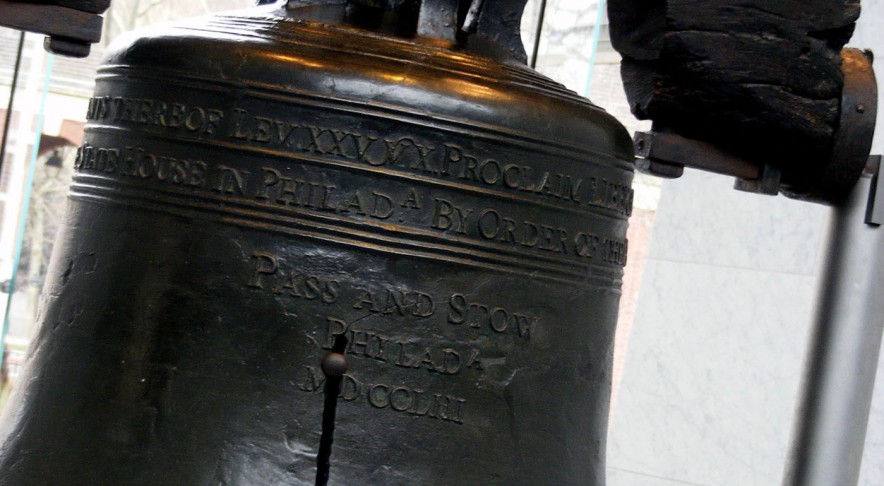 The opening line of the eight-minute film at the Philadelphia Liberty Museum was accompanied by a stark black screen. In the auditory background, in full surround sound, the clanging of a bell, human voices were laughing, talking, shouting above the din of machinery and vehicle horns. It caught my attention immediately.

So often, we are singularly visual in our way of experiencing the world. Despite the potency of the captivating visual imagery that followed, this momentary sound collage captured my imagination, was my favorite part. It drew me in with curiosity and openness.

Typically, I avoid museums – especially historic ones. It isn’t that I don’t care. Rather, I suspect my avoidance is the product of having been exposed to one too exhibits that evoke awe through graphic demonstrations of our unfortunate and sometimes monstrous past. As human beings we seem to be drawn to the strange… the horrible… the unthinkable… to violence… to death. From horrific images of the Holocaust, to the remnants of ancient Egyptian mummies, to wax figures reenacting the Battle of Gettysburg…  we want to know what happened, and how it ended.

I’m not saying, “don’t remember those things.” It’s wildly important that we do.

But I am saying, I also want to examine what went well.

This week, on my visit to the Philadelphia Liberty Museum, I got to do just that. A friend described the museum to me as an inspiring collection of art and history that depicted the theme of Liberty. I walked in with a sense of reserved curiosity, and left three hours later in a state of wonder.

One glass artist from Bulgaria, having fled to the US seeking freedom pursue his craft, described liberty as the single most important condition that enables the flourishing of human creativity, talent and achievement.

In its collection of sculptures, images, words, and photographs of human faces, the museum displayed and celebrated the human virtues: creativity, bravery, zest, love, justice, kindness… one exemplar after another after another captured on display, reflecting the absolute best of who we are. The visit provoked me to think harder about my own experience growing up in the United States – and how much I have to be grateful for.

Liberty, it turns out, is not happenstance.

It is a product of small intentional actions, taken by ordinary people, over time, in service of the collective good. Liberty, at times, requires great risk in order to pursue it. And those who dare to pursue it under circumstances of such risk tend to inspire awe in others. The ripple effect of this awe spins a legacy of heroic and life changing action through the fabric of our culture. Human culture.

This is leadership at its best.

How many of us self-identified change-makers have quoted the words of Margaret Mead, “Never doubt that a small group of thoughtful, committed citizens can change the world; indeed, it’s the only thing that ever has…”?

Mead points to something potent. And universal.

As I continue to reflect on my experience, I am coming to see liberty as a universal human construct that unlocks our deepest potential to thrive.

This week, I invite you to explore your own relationship with liberty… both internal and external…  in body, mind, emotion and spirit.

← Resolutions: Why Some Goals Fail to Motivate
Waking Up: How to Become a Fire Starter →

Are you ready to stop the energy leaks and harness your deeper wisdom to power your innovation efforts? Want to see your team truly walk their talk? Join our inspiring tribe of thinkers and doers, and receive some practical tools today.